Why is snow so much fun ?

January 25, 2013
Nothing brings out the child in us like a drop of snow .... and judging by some of these photographs, we're not the only ones who think the white stuff is fun !
First appearances give the impression that snow is the last thing on Deefa's mind, but don't be mislead by that look. The poor lad is a gentle giant who didn't realise that his species could be as small as Honey - fully grown ! 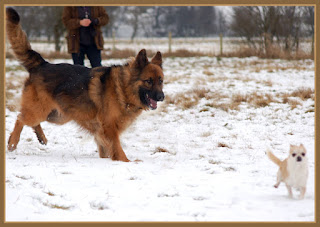 I like to think the photographs say alot about the dogs who come to my home, be it for boarding or residential training. They're different sizes, shapes and colours and temperaments but once here, they seem to gel and get on really well together.
For example, Roxy is a real mix of breeds including some Italian Greyhound - see her run and it soon becomes evident. But introduce snow to her and she likes nothing more than rolling about it in.
Meanwhile Maddie just loves to catch the stuff. A fully trained Working Cocker Spaniel, this 2yr old can become a little deaf to commands when having fun, and for some reason just doesn't understand "that's enough for now" !
Honey is on a mission to prove that Chihuahuas are as tough as old boots . . . . . even if her left paw is getting frostbite !