July 20, 2011
Dogs not getting on with each other is nothing new, though it's very rare that I have several in at the same time who can show aggression.
For just the day, I had Ashka staying with me. And so it was that I decided to take the bull by the horns and expose her to Poppy and Holly ~ two others not slow in coming forward !!
After a very short time with all three, I was able to take them on a walk together - something I was immensly pleased with. And so you have it. Three dogs on their very best behaviour.....despite the downpour ! 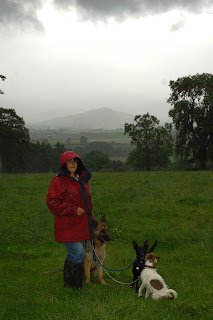