The beauty of long legs....

February 05, 2011
Dexter's long legs really came into their own today! While other dogs were trying their best to avoid some deep puddles on the walk, he was quite happy being on the lead and walking right through them!
At the time Paul was with me and it was very satisfying to see Dexter behaving exactly as he should, but with a different person - and a man, rather than a woman.
Walking on and off lead has become a joy.
The dog who originally pulled when I first met him only two weeks ago has long gone, replaced by one who is really tuned into the person walking him.
He was sound asleep by the fire when Brook (cheeky as ever), took one of his toys and had a jolly good game with it right next to him !!
The difference in their sizes is amply demonstrated by the size of their paws.
However, big or small, the main thing is that they both do as they're told - which they do. 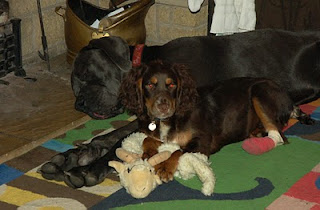