January 11, 2011
Brook arrived yesterday and has settled in really well.
She has already learnt one command - "Out".  I don't favour the dogs being in the kitchen. I don't want a dog to beg as I'm preparing dinner and for their own safety, I want them out of the way as I drain off pasta or such like.
So the simple command of "Out" is always used.
And it was the same for Brook. So I was delighted when after only the 5th time, she not only went out, she even SAT at the threshold !
All that early training and meeting and playing with other dogs finall took a toll on her, judging by the photo.
When I took this picture the weather was horrible - rain and winds - so she certainly was in the best place - close to my fire! 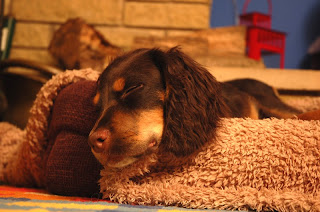 May 16, 2012
Yesterday I had an all day appointment with an owner who'd travelled from Falkirk, mid point between Edinburgh and Glasgow. Linda brought her beautiful looking Welsh Springer Spaniel to see me and to iron out a few problems. Rosie is, or should I say was, a young dog who liked to lunge at other dogs while out on a walk. Having shown the owner how to correct this habit with Honey then Jaffa, I introduced her to my dog Tilly then Fran's hyper Springer Spaniel Jake, who is energy personified ! By now Rosie was being very blase about the whole thing ! Jake, Ted, Frank, who knows or cares ?! Whatever the name they were of little importance to her and she completed ignored them, much to her owner's delight. Prior to travelling to Morland for lunch, Linda asked me the best way to get Rosie into the back of her car. This cheeky dog preferred to be picked up rather than make the effort herself. A simple demonstration followed by Linda doing it herself brought about alot of la
1 comment
Read more